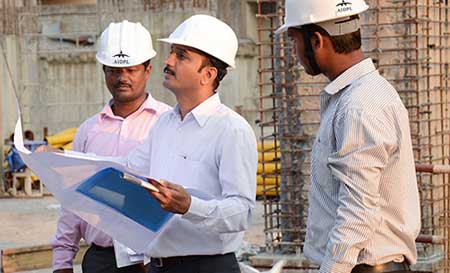 Our company was incorporated on 13th March 2001 and was the culmination of preceding 18 year track record of Mr. Shailendra Singhal

Our company is considered to be one of the most reputable, reliable and respected construction companies in India it, also ranks on top of any list for efficiency, effectiveness and unsurpassed quality projects.

We are actively involved in all verticals and models within construction in India whether, it’s the traditional route based on payment basis or the modern model of PPP (Public Private Partnership) viz. BOT and Annuity.

Madhya Pradesh’s First BOT project was Ujjain-Agar-Jhalawar Road (134 Km) and was awarded to AIDPL as the SPV. The project involved Strengthening, widening and operation of Ujjain-Jhalawar Road on BOT basis.

Our success is attributed to the ability to provide an unmatched combination of skills, experience, quality assurance, timely deliverance and customer commitment to each and every one of our projects.

Ever since the first project completed by the Company , our actions have been guided by the sole objective of delivering value, Building seamless connections and facilitating SocioEconomic-Cultural developments, we are proud to be part of India’s transformation.

And in Everything We do, We Strive for Honesty, Fairness and Integrity
All Right Reserved Agroh Infrastructure Designed By Creative Web Designer. Copyright 2019.